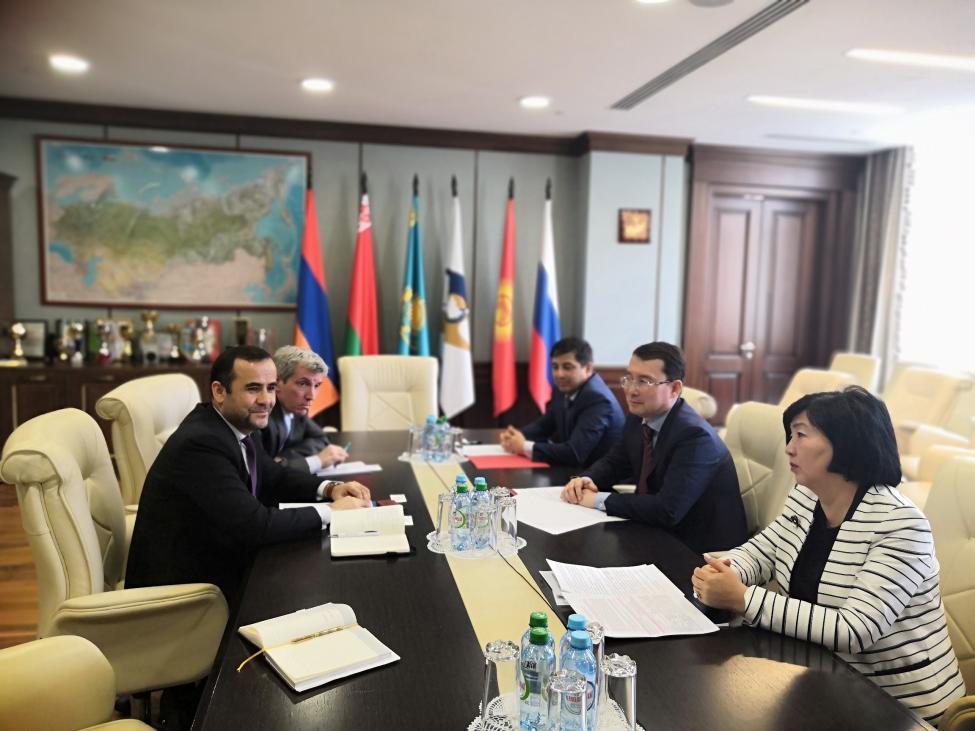 On April 22, 2019, Chief of Mission of the International Organization for Migration in Moscow, Abdusattor Esoev, met with the Minister in charge of Economics and Financial Policy of the Eurasian Economic Commission, Timur Zhaksylykov.

At the beginning of the meeting, the Minister in charge of Economics and Financial Policy of the EEC congratulated Abdusattor Esoev on his appointment as Chief of Mission of IOM in Moscow.

IOM Moscow Chief of Mission briefed about the International Organization for Migration, its activities, as well as the importance of the Global Compact on Safe, Orderly and Legal Migration, which was adopted by the UN member states in December 2018.

The EEC Minister updated that key area of work of the Eurasian Economic Commission in the field of migration is creation of conditions for labour mobility (labour migration) within five EEU countries - Armenia, Belarus, Kazakhstan, Kyrgyzstan and Russia. Timur Zhaksylykov also noted that the Eurasian Economic Commission was actively involved in the preparation of the Global Compact and some of the EEC proposals were included in the text of the final document.

During the meeting the main areas of possible cooperation in the field of labour migration of common interest for two organizations were identified, in particular, the EEC expressed interest in studying international experience in the field of pensions for migrant workers, recognition of qualifications (experience, education, retraining, etc. .), mechanisms for organized recruitment of foreign labour.

The parties also expressed interest in organizing joint events, including in support of the implementation of the Global Compact on Migration, given that out of 23 goals of the GCM, 10 are directly related to labour migration.

In conclusion, the IOM Moscow Chief of Mission and the EEC Minister assured each other in continuing the close cooperation of the organizations.