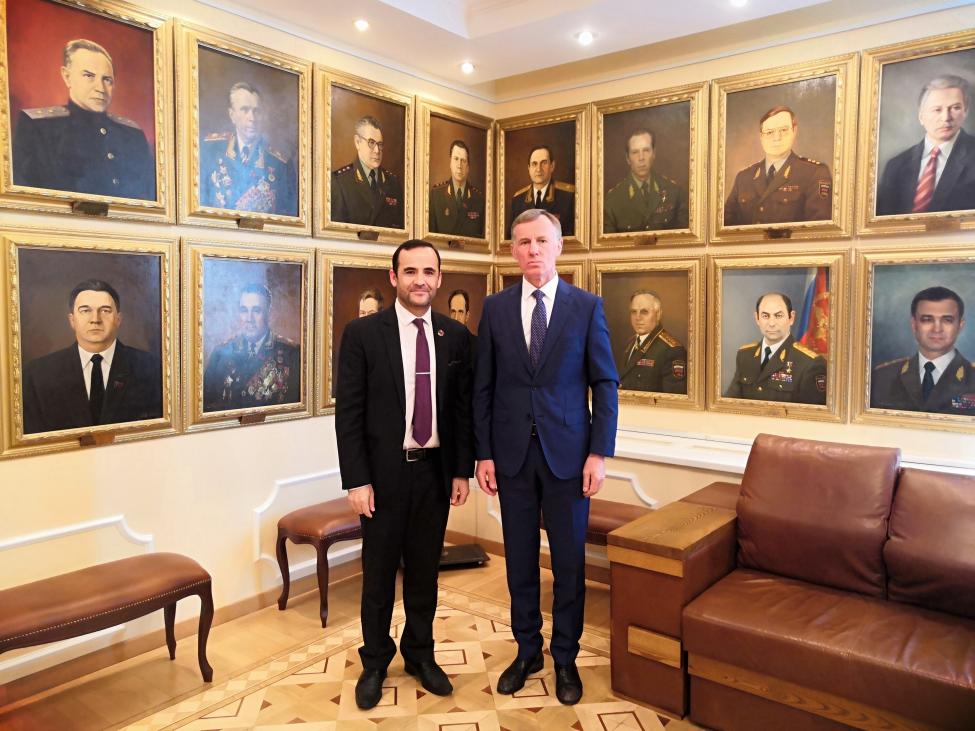 Moscow – On May 27, 2019, Chief of Mission of the International Organization for Migration in Moscow, Abdusattor Esoev, met with First Deputy-Minister of the Ministry of Interior of the Russian Federation, Aleksandr Gorovoy.

The meeting was opened by Aleksandr Gorovoy. First Deputy-Minister of the Ministry of Interior of the Russian Federation welcomed IOM Moscow CoM Abdusattor Esoev in the central office of the MoI of Russia and highlighted that they welcome dialogue with various UN organizations, including IOM as UN Migration Agency. First Deputy-Minister highlighted that MoI of Russia is not a political institution and the discussions on migration are non-political in its nature.

During the meeting the areas of cooperation, first of all of most interest for General Directorate on Migration Issues (GUVM) of the MoI of Russia, were discussed, in particular institutes of temporary and permanent residency, organized recruitment of migrant workers, issues related to Russian State Programme on attracting compatriots living abroad.

Aleksandr Gorovoy welcomed IOM Moscow’s positive feedback on the work of the Russian Federation in the field of migration, including on the issues of the forced migration in 2014-2015, and thanked for quite positive evaluation of temporary migrants accommodation centres created in recent years.

Abdusattor Esoev highlighted the importance of partnership within the framework of the Global Compact for Safe, Orderly and Regular Migration, with the Russian Federation’s active role and support to the Compact. He also mentioned about the UN Network on Migration and IOM’s Coordination role as well as the Secretariat Support. He also added IOM’s readiness to cooperate with the Government of Russian Federation on implementation of the recently adopted Concept of the State Migration Policy of the Russian Federation 2019-2025.

Abdusattor Esoev highlighted the importance of the Russian Federation’s Membership to the organization, which would enable for more opportunities of partnership between the organization and the country.